Playing off the “Reaching New Heights” theme of August’s Delta Chi Convention in Denver, the Arizona Valley Alumni Chapter held its first fall brotherhood event at Phoenix Rock Gym in Tempe for a night of rock climbing on Saturday, September 15.

Despite triple digit temperatures outside, brothers kept their cool while scaling some challenging 30 foot indoor walls.

For most, it was their first time rock climbing in over 10 years, but that didn’t stop them from taking on some of the toughest walls the gym had to offer. 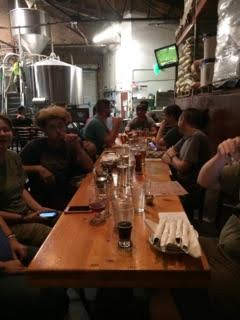 In fact, several of those in attendance showed interest in climbing on a regular basis. To see more pictures, visit this album.

Following climbing, brothers went across the street to Four Peaks to enjoy dinner at Arizona’s most famous brewery. The crowd nearly doubled as brothers were joined by wives, fiances, children and friends.

While watching college football games (including local team the Arizona State Sun Devils), it was a time to regain feeling in hands and arms, enjoy some beers and eat some delicious food.

This was the largest brotherhood event since our shooting night in January, so thank you to everyone that came out. We’re planning monthly brotherhood events for the remainder of 2018 and into 2019, including a Founders Day dinner on October 13.

Check the calendar for details on upcoming brotherhood events.